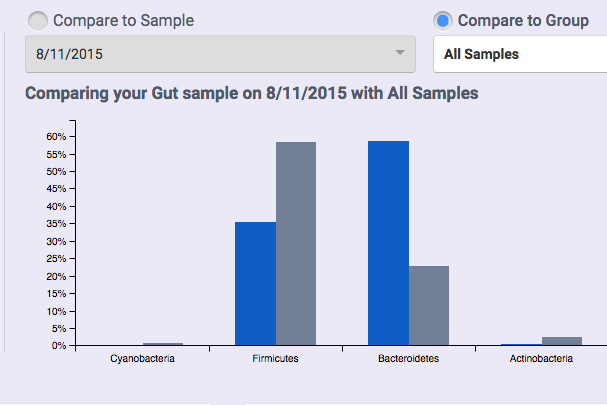 Part 1 of this post: I recently submitted a stool sample to uBiome which you can read more about here.

Once you get your first uBiome results back I recommend selecting the ‘Download taxonamy’ link in the uBiome dashboard and then saving the page that pops up somewhere to your computer, making sure it has the file ending .json. This will put the uBiome data into a spreadsheet that is then much easier to manipulate than when you only have it in the uBiome dashboard.

You can then follow this tutorial by Richard Sprague http://blog.richardsprague.com/2015/01/how-to-analyze-ubiome-sample-in-excel.html which will help you further analyse the data.

I am by no means any kind of expert in the gut microbiome, there is so much we don’t know yet and being able to sample your gut bacteria using the uBiome technology is all very new. The results are not 100% accurate and cannot be used as a diagnostic tool, only to provide clues as to what is going on. If you have specific health issues that you want to get to the bottom of there are far more comprehensive stool analysis tests that you can have done such as the Geneva Diagnostics tests. uBiome is more for fun!

The first point to note is that most gut microbial species belong to four major phyla: the gram-negative Bacteroidetes and Proteobacteria, and the gram-positive Firmicutes and Actinobacteria. So expect to see these four phyla of bacteria making up the majority of your sample results. Bacteroidetes and Firmicutes will make up the bulk of everyone’s sample; these are normal gut bacteria for everyone.

I have always been slim and never had any issues with weight (my weight is between 8 and 8 1/2 stone (112-119 pounds) so I found it interesting to see my ratio match what would be expected – i.e. I have more Bacteroidetes and less Firmicutes. However, my ratio is quite different to any other group. I have no idea if this is in any way significant and there are studies that have also found no correlation between the ratio and obesity.

One of three types of gut ecosystems

The existence of gut enterotypes is still a matter of debate. However, the following, taken from Wikipedia, explains:

“An enterotype is a classification of living organisms based on its bacteriological ecosystem in the gut microbiome. The discovery of three human enterotypes was announced in the April 2011 issue of Nature by Peer Bork and his associates. They found that enterotypes are not dictated by age, gender, body weight, or national divisions. There are indications that long-term diet influences enterotype.

In a study of gut bacteria of children in Burkina Faso (in Africa), Prevotella made up 53% of the gut bacteria, but were absent in age-matched European children.

Studies also indicate that long-term diet is strongly associated with the gut microbiome composition—those who eat plenty of protein and animal fats typical of Western diet have predominantly Bacteroides bacteria, while for those who consume more carbohydrates, especially fibre, the Prevotella species dominate.”

If I had had to predict what would dominate in my gut I would have said Bacteroides since I have eaten a typical Western diet for most of my life and I have always eaten plenty of meat, fish, eggs and animal fats. Over the last two years I have eaten a mostly paleo-style diet, rich in all of these foods. For quite a few years before discovering paleo, I ate a lower carb diet along the lines of the Atkins diet. So I find it strange that my gut is dominated by Prevotella, which according to uBiome is more common “in the guts of vegetarians, non-Westerns, and others who eat a diet rich in carbohydrates and low in protein and animal fat.” I do eat a LOT of plant-based foods as well as meat, probably around 8-10 portions of fruit and vegetables every day, so maybe this explains a little of why Prevotella dominates. While the entire pool of possible members of the microbiota is large (greater than 1000 species), a much smaller number, 150 to 170 species, is found to predominate in any given individual. In general a high diversity of organisms has been associated with states of relatively good health, while low diversity has been associated with states of disease or chronic dysfunction in the scientific literature. Using MG-Rast and with the generous help of Tim Steele (check out his blog which is a fantastic source of information), I have calculated a diversity score for this sample of 14.67 which is low. According to Tim “Generally for people eating lots of fiber and especially resistant starch, diversity will be in the 30-50 range. Less diversity generally is associated with gut dysbiosis and fibre-poor diets.” (At the moment however I am not concerned about this – see notes below on pregnancy). If you want to analyse your own uBiome results using MG-Rast then Tim has created a tutorial on his blog which you can find here.

When I took this sample I was about 24 weeks pregnant. This study looked at the gut microbiota of pregnant woman in the first and third trimesters with some interesting findings:

“Gut microbiota changed dramatically from first (T1) to third (T3) trimesters, with vast expansion of diversity between mothers, an overall increase in Proteobacteria and Actinobacteria, and reduced richness.”

“We describe a dramatic remodelling of the gut microbiota over the course of pregnancy. The first trimester gut microbiota are similar to one another and comparable to those of normal healthy controls, but shift substantially in phylogenetic composition and structure over the course of pregnancy. By the third trimester, the between-subject diversity has greatly expanded, even though within-subject diversity is reduced, and an enrichment of Proteobacteria and Actinobacteria is observed a majority of T3 samples. Furthermore, the abundances of health-related bacteria is impacted. For instance, Faecalibacterium, which is a butyrate-producer with anti-inflammatory effects that is depleted in inflammatory bowel disease (Sokol et al., 2008), is less abundant on average in T3. By the third trimester, each woman’s microbiota has diverged in ways that could not be predicted from the T1 composition, and were not associated with health status or our diet records. Nonetheless, in the majority of women, the shift from T1 to T3 includes an increase in the abundance of Proteobacteria, which has been observed repeatedly for inflammation-associated dysbioses (Mukhopadhya et al., 2012).”

“In summary, we have shown pregnancy to be associated with a profound alteration of the gut microbiota. The first trimester gut microbiota is similar in many aspects to that of healthy non-pregnant male and female controls, but by the third trimester, the structure and composition of the community resembles a disease-associated dysbiosis that differs among women. The underlying mechanisms resulting in the alteration of the microbiota remain to be clarified, but we speculate that the changes in the immune system at the mucosal surfaces in particular precipitate changes in the microbiota, although hormonal changes may also be important.

Dysbiosis, inflammation, and weight gain are features of metabolic syndrome, which increases the risk of type 2 diabetes in non-pregnant individuals. These same changes are central to normal pregnancy, where they may be highly beneficial, as they promote energy storage in fat tissue and provide for the growth of the fetus.”

This means I probably can’t read much into the results of this sample, especially not the diversity score or the level of Proteobacteria. I plan to take another sample a few weeks after the baby is born so I can see what the picture looks like then.

Missing Microbes – What is the Significance?

Since I am not an expert in any of this I don’t really have any idea of the significance, if any, of these missing bacteria, or whether if I do another sample post-pregnancy the picture will be different. I am participating in a webinar with Grace Liu (www.thegutinstitute.com) and Chris Kelly (www.nourishbalancethrive.com) on September 24th 2015 so maybe I will have some more insights after that!

Pathogens in my Sample

The presence of pathogens in your uBiome sample can be a cause for concern if the levels are high. Generally a pathogen-free gut is going to be a good thing. My sample contained two species that are pathogenic:

I have no idea if the levels of these are considered high or if they are cause for concern. There did not seem to be any of the more familiar pathogenic species such as E.coli, Salmonella, Shigella or H. pylori in my sample. It is possible to have pathogenic bacteria residing in the gut that are not causing any problems and it might only be after, say a course of antibiotics, that these pathogens might bloom and cause a problem.

What Can you Do to Improve Your Gut Microbiota Profile?

To promote and sustain beneficial bacterial commensals, consider the addition of probiotics (live bacteria), increasing the amount of fibre in your diet and/or prebiotic supplements (products to support indigenous microbiota).

I believe one of the best probiotics now available on the market (and UK-manufactured too) is Elixa-Probiotic which contains a very high strength of 9 strains of Lactobacillus and Bifidobacteria. Tommy Wood and I recently recorded an episode of the Eat Better Podcast with Karl Seddon, the founder of Elixa, which you can listen to here.

Increasing the amount of fibre in your diet

Botanical products (berberine, neem etc) may also be used to decrease or modulate gut bacteria. For more on this read anything on Grace Liu’s blog.

Read about My High-Fibre Paleo Experiment and stay tuned for an update after I have sent subsequent samples to uBiome.