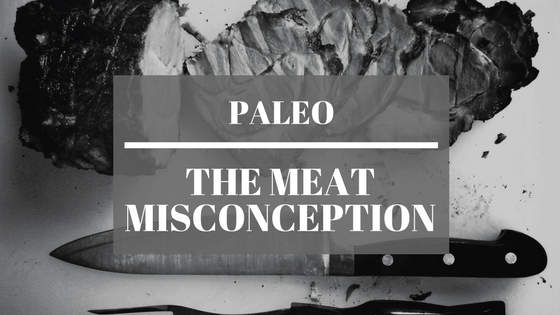 Many of us have heard of the ‘Paleo diet’ and it is very common for someone who doesn’t currently follow a ‘paleo’ or paleo type diet or knows little about it to say something like… “Isn’t that just eating loads of meat though?” or “yes I’ve heard of it, you can’t each much can you?” or “you just eat loads of meat right?”

It is totally understandable that someone who has done very little or no scientific or nutritional research on this type of diet to have a skewed opinion of what this type of lifestyle choice involves.

More often than not a ‘Paleo’ diet has been given a bad rep in mainstream media and there is a lot of misinformed and poorly researched information put out about it.

For example, today we watched this video on YouTube.

You should watch full the video, this is obviously a really extreme anti-paleo opinion but it really never ceases to amaze us quite how many ridiculous things actually exist on the internet. Even if there is a lot of bad press for Paleo there is also a huge amount of scientific research, counter arguments, discussion, podcasts, articles and more discussing the fact that following a ‘Paleo’ type diet is not a diet that focuses solely on eating meat!

The representation in this video (that people who follow a paleo type diet are ignorant, hypocritical, stupid meat eaters) doesn’t quite pair up with the attitudes and beliefs of many paleo advocates, us included.

Yes, eating ‘Paleo’ does include eating animal products, but the idea that our meals are made up of predominantly meat is wrong.

There are lots of Ted talks, videos, articles and books that have attempted to ‘debunk’ paleo over the years. We watched another video where a vegan stated that the modern interpretation of the paleo-diet is flawed because our ancestors got the bulk of their calories from plants. And therefore a vegan diet more closely resembles what our ancestors ate. She also goes on to say they did however eat some meat…hmmmm?

How does a vegan diet better resemble what our ancestors ate than a Paleo diet that is mainly plant based but with some good quality animal products? Back in 2013 a book called Paleofantasy by Marlene Zuk was released, the book discussed how following a Paleo diet is flawed. Even at the time Paleo advocates who reviewed the book gave counter arguments to say that the paleo way of eating shouldn’t be overlooked. Chris Kresser discussed the book in his Revolution Health Radio Podcast, listen at 22.04 for his take on the book.

So why are these outdated opinions still being put about? Could it be these paleo critics have a hidden agenda? Of course there are extreme examples of the way people follow different diets. There will be people who say they follow a Paleo Diet and eat mainly meat and little vegetables. There are also many people who follow a vegan diet who eat mainly refined carbohydrates, sugar and grains and little vegetables. Neither of these extremes are going to be healthy to the person following the diet, neither of these examples are a fair representation of the actual diets either.

These extremes are also very different to a diet of someone who eats sustainable, locally sourced grass-fed and organic animal products as well as lots of healthy foods such as fruits & vegetables, nuts, seeds and fish etc.

The biggest misconception of paleo is that it is somehow synonymous with the Atkins diet (where the focus is more on fat and protein than fruits and veggies).

However people who are ‘all-in’ on the paleo lifestyle tend to have 2/3rds or more of their plate filled up with vegetables and a small portion of protein (usually meat or fish) added. Some people of course decide to eat more meat but nowhere in the basic Paleo principles does it suggest your diet should be mainly meat based. It is in fact a diet that promotes the consumption of more vegetables, and whenever possible eating meat from pasture raised or free range animals. (Not just “eating loads of dead bodies” like the guy in this video suggests.)

We know that eating meat can be controversial and emotional! It can be hard to separate the science behind the health effects from the ethical concerns and environmental impact and that’s why we write blog posts. We also try and learn as much about diet and health as we can so that we aren’t just posting opinion and dressing it up as fact. When following a paleo diet we do not recommend industrial grain fed or non-organic meats (full of hormones, antibiotics and pesticides) or lots of processed meats.

We do however recommend where possible local, sustainably produced organic and grass-fed animal products. This is because there are critical nutrients for optimum health in animal products that you cannot get from a solely plant based diet without supplementation. See a previous blog post on this for more detail.

Here are a few books that discuss pasture raised animals and how this type of farming can benefit the environment. Eating this type of meat is of course a little more expensive but instead of big quantities of meat we try to focus on smaller amounts of QUALITY fish and animal products each week, often we have days where we eat mainly or only vegetables for example we have ‘Meat Free Mondays’!

Many of the bigger names in the ‘Paleosphere’ shall we call it, are very well informed and have done huge amounts of research, they produce unbiased, reasonable and fair discussions on diet and lifestyle choices. They are also hugely concerned with the welfare of our planet, our animals and the health of our nations. These people are nothing like the example in the video above. The main thing we all advocate is eating real, whole unprocessed food. This includes lots of vegetables and fruit, of course some animal products & fish as well as fermented foods, nuts, seeds & healthy fats.

No one can argue that we all need to eat more fruit and vegetables!

Even the terrible Eatwell guide recommends a large portion of our plate is vegetables – this is about the only good recommendation on the guide though –  but we won’t get into that here. If you are interested on our thoughts we wrote about it here. The other thing we all advocate when eating paleo (which is also often overlooked by critics) is avoiding all processed food!

To see how much fruit and veg we actually eat while following a paleo type diet we have included some examples of our plates of food over the past week. Here we had roasted pork belly, as you can see its a small portion of meat and the majority of the plate is veggies. We served it with wilted Rainbow Chard and a raw vegetable ribbon salad. This is a breakfast plate where we did have eggs and bacon, but we served it with a lovely big green salad, avocados, pistachio nuts and olive oil. This is a meat free plate we had for lunch, a lovely green salad, raw vegetable coleslaw and baked sweet potato.