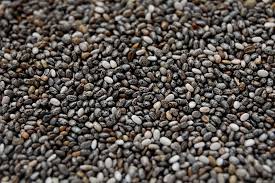 Are chia seeds really a superfood? Or are all the claims about them just hype spun by the companies selling them?

Chia seeds are one of the latest “health food” crazes and seem to be everywhere at the moment. I also often get asked the question ‘Are chia seeds paleo?’

Chia seeds are marketed as a super food with lots of health claims made about them such as the ability to stabilise blood sugar and aid weight loss. I also keep seeing the claim that chia seeds contain 8 times more omega-3 than salmon and are the richest natural plant source of omega-3 fatty acids. Are these claims backed up by any science? Chia seeds contain large amounts of the omega-3 fat alpha linoleic acid (ALA). Their omega-3 content is one of the things widely promoted by the companies selling these seeds with claims such as “Chia seeds contain 8 times more omega-3 than salmon”. Unfortunately for vegans and vegetarians, it is not a good idea to rely on ALA to meet your omega-3 needs since the body actually needs the omega-3 fats eicosapentaenoic acid (EPA) and docosahexaenoic acid (DHA). EPA and DHA are converted into prostaglandins which regulate cell activity and DHA is a structural component of the brain, retina and skin. Our immune, cardiovascular and nervous systems simply cannot function correctly without sufficient amounts of EPA and DHA. Our brains are 60% fat by weight and DHA makes up an average of 15-20% of all fat in our brain. Drops in brain DHA levels are known to associate with cognitive impairment or slower neurological development in children. Nervous system deficiencies of DHA have been associated with a wide variety of problems including neurodegenerative diseases. The main source of EPA and DHA is cold-water oceanic fish like cod and salmon.

The figures (according to the USDA)

So whilst it is true that chia contains 8 times more omega-3 than salmon, it is solely in the form of ALA with no EPA or the crucial DHA. Studies have shown that the conversion of ALA to EPA and DHA is low. Although it is possible for the body to convert ALA to EPA and DHA by enlongase and desaturase enzymes, research (see several studies referenced at the bottom of this article) suggests that only a small amount can be synthesized in the body from this process. For example, 1 study suggested that only ∼2 to 10% of ALA is converted to EPA or DHA,  and other studies found even less: Goyens et al. found an ALA conversion of ∼7% for EPA, but only 0.013% for DHA; Hussein et al. found an ALA conversion of only 0.3% for EPA and <0.01% for DHA.

The body’s ability to convert ALA into EPA and DHA is effected by other things in the diet too. If you consume a lot of omega-6 this will reduce the amount of ALA converted (if you are vegan/vegetarian and eat a lot of nuts and seeds you will be eating lots of omega-6). Similarly, if you are deficient in vitamins B3 or B6, or the minerals zinc or magnesium then your body may not be able to produce optimal amounts of EPA and DHA, even when ALA intake is high. Vegans and vegetarians have been shown in many studies to have lower levels of EPA and DHA than meat eaters.

For vegans and vegetarians there is an excellent article here on VeganHealth.org on the role of the essential fatty acids, looking at lots of studies involving vegans with advice on supplementation: http://www.veganhealth.org/articles/omega3#fn37 Nutritional breakdown of chia seeds per 100g (according to USDA database)

Although on paper chia seeds look like a good source of minerals, there are several things to point out here.

1. Chia seeds form a clear, mucilaginous, polysaccharide gel when placed into water which remains tightly bound to the seeds. This gel likely protects the seed from being fully digested, so some of the claims about the nutrient levels in the seeds are likely exaggerated.

2. Chia seeds contain high amounts of anti-nutrients called oxalates which means the absorption of both calcium and iron will be decreased. Too much oxalate in the diet can be a problem in itself, especially for anyone suffering autoimmune disease or increased intestinal permeablity (leaky gut).

3. All seeds (not just chia seeds) contain a lot of another class of anti-nutrients called phytates (reflected in the high phosphorus content of chia seeds). Phytates are formed when phytic acid (the principal storage form of phosphorus in the seed) binds to a mineral (such as calcium, magnesium, iron, potassium or zinc). The resulting phytate salt cannot be digested by our bodies. This means some of the phosphorus, zinc and iron in chia is not available to us. One study indicates that chia seeds do contain phytase enzymes which may make the minerals more available. Phytates cause other problems as well as potential mineral deficiencies, such as increased gut permeability due to the effect they have on digestive enzymes (more on that here), and increased bacterial overgrowth due to them hindering digestion. Chris Kresser has written about phytic acid here.

4. The iron that chia seeds contain is non-heme iron which is poorly absorbed by the body (compared to heme iron). The absorption rate is 2-20% and depends upon what else is eaten alongside the iron.

These problems mean chia seeds are likely not a particularly good source of any minerals. So if you are consuming chia for the mineral content, and allowing them to displace other foods with more bioavailable minerals, then it’s probably not a good idea.

Further claims: Let’s look at some of the other claims such as ‘weight loss’ and ‘superfood for the brain and heart’. In a study on 90 overweight men and women who ingested 50g of chia seeds a day for 12 weeks, the study authors concluded that the consumption of chia seeds “had no influence on body mass or composition, or various disease risk factors”. They found plasma ALA increased by 24.4% but there was no change in plasma EPA or DHA levels. Another study came to similar conclusions. This time 62 women ingested either 25g milled chia seeds, 25g whole chia seeds or a placebo for 10 weeks. The study authors found that in the milled chia seed group only, plasma ALA concentrations increased 58% and EPA by 39% but the whole chia seeds produced non-significant changes. There was no change in the plasma concentration of DHA in the study participants. They also concluded that neither milled nor whole chia seed had any influence on inflammation, disease risk factors or body composition. So the claims about chia here are definitely not backed up by the science.

A small study looked at the effect of adding chia seeds to the diet of twenty type-2 diabetics and found that certain markers of disease improved. However, as already discussed, these effects were not seen in healthy individuals.

Chia seeds are 40% fibre by weight which makes them a good source of fibre. Soluble fibre feeds the friendly bacteria in the intestine, which is important. However, as already discussed, the high amount of phytate in chia seeds might cause bacterial overgrowth if they are consumed in excessive amounts. If you are eating a good amount of starchy and non-starchy vegetables then you most likely don’t need supplemental fibre.

Chia seeds are also high in protein with a good balance of essential amino acids. For vegetarians or vegans chia seeds are a good source of plant protein. For anyone that eats meat, fish, eggs or dairy there is no need to turn to chia seeds to meet your protein needs.

*Most of the claims about chia seeds are over-exaggerated and in the case of weight loss claims, are not supported by any scientific research.

*If you are suffering from autoimmune disease or any kind of digestive disorder then it’s probably best to avoid chia seeds because of the anti-nutrients (oxalates and phytates).

*If you are a type-2 diabetic, you may see some benefits from consumption of chia seeds.

*If you are in good health then moderate consumption of chia seeds is probably fine. Studies looking at 25-50g chia seed consumption per day in healthy individuals did not show any negative effects (but nor did they show any positive effects).

*Do not rely on chia seeds to meet your omega-3 needs or your mineral requirements since they only provide ALA (and not the crucial DHA) and the bioavailability of the minerals is likely to be quite low.

*Choose milled chia seeds rather than whole chia seeds to gain more benefit from the nutrition they contain. A note about flaxseeds – flaxseeds have many of the same issues as chia seeds – they are high in phytic acid  and phytates, form a mucilaginous gel when put in water that likely hinders digestion of the nutrients in the seeds and contain only ALA which is poorly converted to EPA or DHA in the body.

However, there is a further problem with flaxseeds in that they contain an extraordinarily high amount of phytoestrogens. Flaxseeds contain 379380 ug/100g. Compare this to soy (which we are told to avoid due to it’s phytoestrogen content) which has 103920 ug/100g and you can see that the levels in flaxseed really are high. The main type of phytoestrogens in soy are isoflavones whereas the ones in flax are mainly lignans. The jury is still out as to whether phytoestrogens are beneficial or harmful. Since the level in flaxseeds are so high we would recommend exercising caution when consuming flax.

References – ALA conversion to EPA/DHA

New to paleo? Do you want to lose weight? Looking to increase your energy levels? Do you want easy, simple paleo recipes and paleo inspiration? Sign up here for our 30 day paleo plan

Author: Paleo Britain
Filed Under: Nutrition Advice, Paleo Superfoods
Vitamin K2 – are you getting enough?
Are Blue-Green Algae Supplements such as Spirulina and AFA a Good Idea?